What are the weirdest questions asked in an IIM interview? 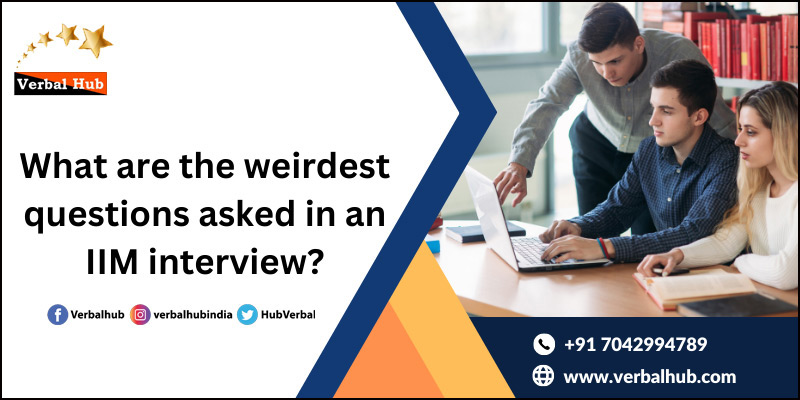 1. The Situation with the National Anthem (IIM Lucknow)

Do you know the author of the Indian National Anthem?

Panelist 2: Stop or else we'll have to get up as well.

This incident occurred four years ago during my interview at IIM Calcutta. I had stated that I adore dumb charades in some way.

Consequently, one of the teachers made the decision to have fun. He approached me and said, "Incredible India," whispering it in my ear while asking me to act it out. The other professor was also expected to make an estimate. We finished in less than ten seconds.

3. What tax rate should I be on? The IIM Ranchi

Panelist: You must be aware of the amount of income tax I must pay for this year since you applied in the field of taxation.

Me: Certainly, Sir. Could you please tell me your annual salary?

Panelist: Without a doubt, not even a dog could respond to my query if I provided an answer.

I studied Bharatanatyam dancing. I was therefore asked to demonstrate a relevant example during my IIM Calcutta interview. In the IIM interview, I actually danced!

5. The recruitment of ISIS (IIM Lucknow)

During this year's IIM Lucknow interview, my friend and I experienced this.

Me: "Yes, sir." The Lokpal Bill is the subject. (Cue my speech about the novel's setting.)

P2: is using his phone during this time. He glances up out of nowhere and thrusts his phone in my direction. Look, Amazon has it for Rs 100.

Prof. 1 begins examining my diplomas and transcripts from the college.

Prof. 1: Ah, you got the gold medal. What tongue is this certificate written in? (This is my Venkateswara College diploma)

Me: I have no idea. It's some sort of South Indian language.

Use your brain, Prof. 2 Which state is the birthplace of your college, Venkateswara Temple?

Me: Near the Tamil Nadu border in Andhra Pradesh

Professor 2: Alright, so which language is used in Andhra Pradesh?

Me: (With absolute certainty) Tamil

Professor 1: Oh, really? What language is then used in Tamil Nadu?

Prof 2: Just consider. In TAMIL-Nadu, what language is spoken?

Me: I already told you in Telugu. The two professors started laughing hysterically. As I sit there, completely red-faced, they rectify my error and give me a lesson on the four south Indian states.

After writing down the numbers 93, 75, and 57, the interviewer says, "Please tell me the next number in this series."

Interviewer: Yes, that's correct. The numbers actually represent the percentages of your class's tenth, twelfth, and graduates. In addition, if you are shortlisted, the number you wrote will represent your average grade (they later reveal it to be a joke).

9. "Prepare Octopus Soup": Is This a Home Science Assignment or an IIM Interview?

Interviewer: I note that you mentioned in your application that you are good at extempore, debates, and other such activities.

Respondent: "Yes, sir." I participated in and won a number of these tournaments while I was in school.

Interviewer: Good, thanks. Tell me how to make octopus soup in 30 seconds.

Interviewee: Sir, the first step would clearly be to capture an octopus or go buy one (stunned pause for 5 seconds, trying to understand how to go about this). The octopus meat must then be pounded with a hammer to tenderize it; otherwise, the texture of the meat would be incredibly rubbery.

10. Whom do you know better? IIM Calcutta or IIM Bangalore?

Okay, tell me what you know about IIM Bangalore, says the interviewer.

Interviewee: Ma'am, it's also one of the best business schools in the nation. (With a bewildered expression.)

Interviewer: So you are more familiar with Calcutta than Bangalore? You didn't get a call from IIM Bangalore, did you?

Interviewee: Ma'am, the interview is in two weeks, however, I did get a call from IIM Bangalore.

Other peculiar queries that have reportedly been asked during IIM interviews include:

1. Why do you think you don’t currently have your boss’s job?

2. Can you tell us the recruitment and HR structure of ISIS?

3. If they did a movie about your life, what actor or actress would you choose to play you?

4. Could you sing the National Anthem for us?

5. What is the worst book you ever read?

6. Does mismanagement have something to do with women managers?

7. If your parents were talking about you right now, what do you think they would say is your most annoying trait?

8. Assume that we're the board members of the Times Now channel and you're an aspiring newscaster. How would you convince us to replace Arnab Goswami?

9. Don’t you think an MBA is really just a waste of time?

10. What’s the best email address you’ve ever seen? Why?

No matter how challenging these questions might seem, one must understand that they are all based solely on the candidates' profiles. The goal in this situation is to remain calm, decipher the logic behind these inquiries, and respond as intelligently and competently as possible. Instead of freaking out, a candidate should approach these questions seriously but with a grain of salt.